Examples of the Smaller/Bigger Picture

Hello!  It really has been an inexplicably long hiatus.  I have no excuses, and I will own my own part in the recent gap.  There.  I just had to get that off of my chest.  And now I feel better.

* Harriet Gahr was the mother of my dear and great friend Thea Gahr.  Thea introduced me to this family, and I’ve hung around ever since.  I’ve maintained a close relationship with Harriet and Ted (her husband) often staying out at their property usually for a few days at a time, but sometimes weeks and months at a time.  I have gotten to know many members of the large Gahr clan as well as other long-time friends of the family who’ve gotten sucked into their generous and magnetic pull.  That was just the kind of people they were.  Harriet passed away on Tuesday Nov. 1, 2011 (also Día de Muertos), after a year-long and heroic battle with cancer.  It is an honor and a gift to be included in this family, and to have been able to spend such good time with Harriet in the past decade.  www.gahrfarm.com 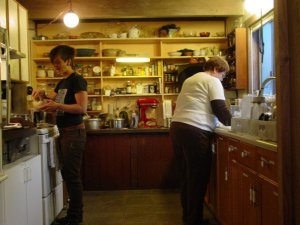 2 thoughts on “Examples of the Smaller/Bigger Picture”

Stuff we talk about